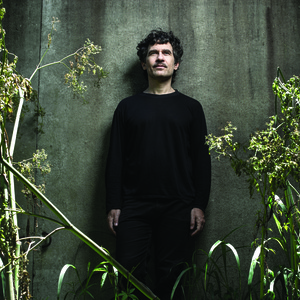 Born in Buenos Aires, Axel Krygier first studied flute, piano and sax and went on to become a member of several leading bands of the Argentine rock scene. He’s released three albums locally, set up his own experimental  combo as well as a sound system with which he made club ...

A devoted practicioner  of cultural  mashup and an adept of chaos theory, Argentine maverick Axel Krygier presents his fifth  album Hombre de Piedra («Man of Stone»), a real turning  point in the path he’s been following:  unlike  his previous records, which were assembled with a collage-like technique, his new one is a concept album, a delirious journey inspired by the French documentary ‘Lascaux: Le Ciel des Premiers Hommes’ (about the famous paleolithic cave paintings).

To tell the story of this caveman who speeds through the entire history of mankind in fast motion, Axel Krygier has explored new sonic and musical territories. Including his talent as a singer: his confident, captivating vocal performances occupy center stage as they never had before and, even if one doesn’t understand Spanish, his voice has a narrative quality which irresistibly carries the listener away.

Axel Krygier is definitely one of the central yet most atypical figures of the Argentine music scene. A multi-instrumentalist, composer, singer, producer, songwriter,  activist and iconoclast militant,  he is firmly  rooted in Latin-American  music but has a universal outlook. Axel Kygier is also a film soun- dtrack composer, and has written music for many plays, musicals and dance performances.  It should also be noted that Axel designs his own record sleeves and directs his own music videos.

On his upcoming tours, Axel will be appearing with the Argentine musicians who have backed him on the album. Aside from guitarist Juan Ravioli, who has been working closely with Axel since 2010, and renowned for his talents as an arranger (a.o. for Melingo), the band includes drummer Diego Arcaute (who also tours with Juana Molina), bassist Seca Cutaïa (the son Argentine rock legend Carlos Cutaïa) and Manuel Schaller (a member of Sexteto Irreal  and a close associate of Axel’s since 2005) on theremin and synths.